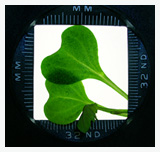 The photo below is of Luca, Mike, and Craig at the Vineyard the morning after a Fabulous Truffle Dinner on the site where nanogreens were first served. Chef Craig Hartman, shown here on the right, loves to tell his "microgreens" story when he introduces a special culinary event. In the early nineties while at the Clifton Inn, Craig asked Mike to cut some smaller lettuces, and still smaller, till one day Mike came into the kitchen during a culinary book interview and photo shoot with the tiniest greens yet. We called them microgreens, charged him a bundle - because we cut half our total production just to get the one box - and the name got printed! We can't really verify that it was the first time such a term was coined; however, we do know that nanogreens were invented right here at Palladio where this photo was taken. Hartman is an annual guest Chef at Palladio serving incredible multi-course meals with paired wines from Barboursville Vineyard. During one of those special dinners we delivered the tiniest greens we ever cut and as a little joke we had labels printed as "Nanogreens Special cut for Chef Hartman dinner". Well, they were a big hit and now Palladio gets a delivery of nanogreens each week! Mike was an engineer and he couldn't resist going from the term micro (the abreviation for 10 to the negative 6 exponent) to the term nano (10 to the negative 9 exponent). He is trying for pico ( that would be 10 to the negative 12 exponent ) - but those greens are really just what we all know as sprouts.

Where are they now? Luca is still the nicest person we ever met and running the vineyard superbly, Craig is Executive Chef at The Keswick Hall and Club near Charlottesville Va, Mike is off measuring greens somewhere with a digital camera, magnifying glass, and calibrated scale. 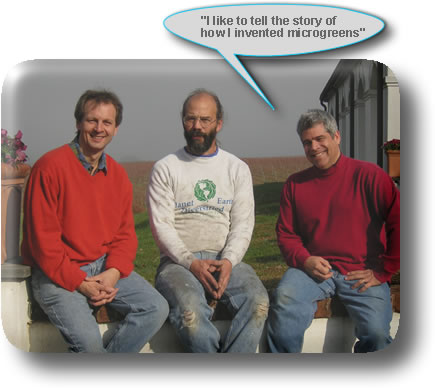 An Example of the sizes of Arugula 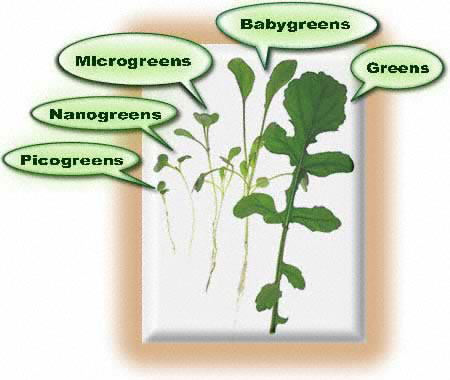 Many creative exchanges happen with our Chefs and this is the thrill of our pursuit of excellence in growing fresh and exotic greens that keeps us going strong. Melissa Close of Palladio uses our nanogreens in most every menu and they are showcased in a special dinner next July